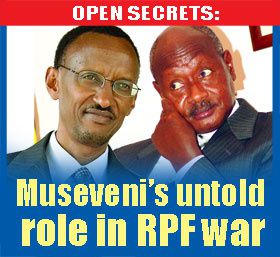 When Rwanda, last Saturday, described President Museveni as a brother who supported the October 1990 RPF invasion of Rwanda “to its conclusion,” nobody meant to embarrass the man who says that Rwandese officers in his NRA simply “escaped” from Uganda to invade their homeland.

The Ugandan leader, who was declared a hero for his role in the war that brought President Paul Kagame’s RPF to power in 1994, has always maintained then that the Rwandese who served in his National Resistance Army (now UPDF), escaped without his knowledge.

For 19 years since the RPF attacked Rwanda, that has remained the official position until last Saturday, July 4, 2009, when RPF decided to publically acknowledge Museveni’s role by awarding him The Rwanda National Liberation Medal (Uruti). So what role did the President of Uganda play?


Three days before the October 1, 1990 invasion, Maj. Gen. Fred Rwigyema (RIP), the highest ranking Rwandese officer at the time – flew to various NRA units starting with Bombo Barracks aboard a military helicopter. In Bombo, he met and held closed-door talks with Rwandese officers there.

Sources have told The Observer that on that day, Rwigyema told the Commandant of the Bombo Barracks, Maj. Kiiza Italikire, that he had a big task to accomplish.

He was understood to mean that he had several military units to reach in a short time. So, from Bombo, Rwigyema was flown to Masindi and then to Arua—the two places known to have had large numbers of Rwandese soldiers.

Senior Army officers have told us that when after three days it was reported that Rwigyema had deserted the NRA along with Rwandese soldiers to attack Kigali, they realised that his tour of different Army units was part of the final preparations for the war. That he flew in a military helicopter could point to the fact that the invasion was planned and executed at the highest level, Army sources say.

The invasion was so secretly planned that apart from the few who were part of the planning, no non-Rwandese officers in the NRA got to know about it.

In fact, many Ugandan officers and their juniors got to know about the invasion the following day when some of their colleagues were reported missing.

The story of “missing soldiers” dominated conversation, especially when it involved people who were not known to be Rwandese until then. One such officer was Col. Adam Wasswa who all through the Luwero bush-war was known by colleagues to be a Muganda.

It is not clear up to now how soldiers sneaked out of the barracks without the knowledge of the orderly sergeants whose duty is to walk around at night to ensure guards are on duty and not sleeping.

Military sources say there is no way Rwandese soldiers would have escaped without the knowledge of either the guards or the orderly sergeants.

“Besides, military encampments usually keep what they call observation posts immediately outside. The work of these observation posts is to detect any movement of a group of people towards or outside the barracks,” our source said.

The Rwandese in the NRA needed no training.

Recruits who were picked from all over the country were trained mainly in Sembabule District. The then Minister of State for Defence, Gen. David Tinyefuza, used the excitement caused by the controversial ranches restructuring programme in Sembabule to conceal the recruitment and training of RPF fighters.

The ranches restructuring scheme involved taking way land from ranchers and allocating it to squatters or herdsmen.

Sembabule, which was then part of Masaka District, was sealed off to create safe villages that were inaccessible by anybody, including then Masaka Special District Administrator, Joseph Mulwanyamuli Ssemwogerere. One needed special permission from top military officers to access these villages.

People who once travelled with Ssemwogerere to these areas said he was only cleared to travel to Sembabule by President Museveni. They reported bumping into RPF camps preparing for the invasion. With the help of the Ugandan military, the RPF were commandeering cattle belonging to ranchers to a collection centre where they were slaughtered and smoked for the fighters to eat during the invasion.

Military sources are now telling us that big guns were stationed in the southern part of the country, which helped the RPF to attack Rwanda. Some military trucks were also used to ferry fighters to the border.

The RPF attack on Rwanda was as swift as the Iraq invasion of Kuwait on August 2 of the same year. Perhaps the invaders headed by Rwigyema had watched how Iraq’s tanks rolled into the helpless neighbouring Gulf state and wanted to replicate the same.

Indeed the RPF walked over President Juvenal Habyarimana’s army and by the second day they were in the outskirts of the capital, Kigali, ready to take over.

Senior UPDF officers tell us that this invasion was supported by some Ugandan soldiers, and Kigali was to fall on the second day, according to the plan.

Ugandan soldiers who fought alongside the RPF say that Habyarima’s army was taken by surprise and fled in disarray.

It appears the magnitude of the task had forced the RPF to unite, but after looking like a walk-over, sharp differences emerged within hours of the planned final assault on the capital city.

The fall of Kigali would mean formation of a new government and swearing in of a new President. A power struggle is said to have erupted between the most educated officers; Maj. Dr. Peter Bayingana and Maj. Christopher Bunyenyezi on one side, and Rwigyema on the other. Bayingana, a medical doctor, was the most educated and reportedly wanted to be president. He never wanted to be led by Rwigyema, a man with modest education. In the confusion, Rwigyema was killed.

It is further reported that even these two; Bayingana and Bunyenyezi, hadn’t agreed on who should be president, and sought to scheme against each other.

Incensed by the Rwigyema killing, fighters loyal to him quickly organised themselves and raided both Bunyenyezi and Bayingana camps, and in the ensuing exchange the two senior officers were also killed.

It was then total confusion as the invading force turned guns on each other. At this point, the RPF was in disarray and some of the fighters reportedly abandoned the war and sneaked back into Uganda.

When Habyarimana’s soldiers heard of this state of affairs in the rebel camp, those who were fleeing regained composure and returned to the front line. They even gathered enough courage and strength to repulse the RPF.

With the death of Rwigyema, Bunyenyezi and Bayingana; Lt. Col. Steven Ndugute and Lt. Col. Adam Wasswa were the only surviving senior officers. Ndugute was a trained fighter whose military career started during President Idi Amin’s regime in Uganda. Before joining NRA, he had been part of the Uganda Freedom Movement of Andrew Kayiira with the likes of Brig. Kasirye Gwanga.

Our sources say that after the death of the three senior leaders, the RPF lost grip on Kigali and began a hasty retreat towards Uganda.

It is at this point that President Museveni sent in Gen. Salim Saleh to help re-organise the rebel force. Saleh’s immediate task was to stop the RPF from fleeing the war front. When he arrived, our sources say, he helped them dig some defences and advised them to apply some guerilla tactics similar to what the NRA had done in Luwero.

Museveni reportedly told the NRA High Command thereafter that the first invasion backfired because Rwigyema had not listened to him. It is understood that he had advised him against a hurried takeover of Kigali.

By the time of the invasion, Paul Kagame had been sent on a military course in the United States by the Uganda Government. The events that followed soon after the invasion forced him to return.

Our sources say that the man, who would be Rwanda’s new leader, spent about three days in Uganda on his way to the battle front, receiving briefing from Saleh. But he didn’t need much coaching because he was already an experienced fighter, having joined the NRA bush war on day one. In fact, Kagame had served as deputy Director of Military Intelligence before going to study in the US.

Kagame, with the help of Ugandan officers, quickly re-organised and propelled the RPF to power. His leadership was as challenging as that of Rwigyema. It saw the death of Habyarima in a plane crash which sparked off genocide in which an estimated 800,000 Tutsi and moderate Hutu were killed in 1994.

Saturday’s celebration at Amahoro Stadium is the fourth time those who contributed to the struggle are being honoured. Political analysts say that had it not been for the frosty relations between the two countries, following the military clashes between the RPF and UPDF in Kisangani, DR Congo in 1999/2000, Museveni’s medal would have come much earlier.