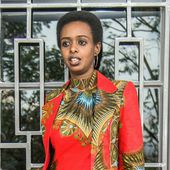 Rwanda's most well-known opposition politician has accused the president of condoning the murder of people who criticize his government. Diane Rwigara has written an open letter to the president, part of which says: "We rightly accuse the international community for remaining silent during the Genocide. Yet, 25 years later, we are forced to stand aside and watch helplessly, as our loved ones become victims of cruel, inhumane politics. How long can this last?" She has spoken about a prison guard who was killed after speaking out about unrest in his prison which left some prisoners injured. Diana Rwigara explained her understanding of the case to Newsday's Tom Hagler. (The Rwandan government has not responded to a request for comment from the Newsday programme.) (Photo: Diane Rwigara. Credit: Getty Images)