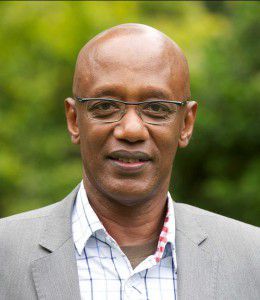 President Kagame also made Gasana a Minister of State for Foreign Affairs and Cooperation back in November 23, 2012. Imagine that — Rwanda’s minister responsible for foreign affairs and cooperation lives in New York City.

That should tell you something about Kagame-Gasana special relationship. For Gasana, there is no Rwanda but Kagame. For him Kagame is the state, and the state is Kagame. For Kagame, Gasana is his personal assistant who looks after his interests and family affairs in the United States. There is a special bond between the two men — beyond state affairs. The two men symbolise the worst of personality cult where the ruler is king.

And so it comes as no surprise why Gasana went bananas in the United Nations the other day over Kagame. It all began when the US Ambassador Samantha Power during Security Council’s debates asserted that “democratic processes are being deliberately undermined” in Uganda, DR Congo, Rwanda and Burundi. The US Ambassador highlighted what she called “blatant power grabs” by the presidents of the Great Lakes countries. There is nothing new in these statements — these presidents have tinkered with constitutions to stay in power.

Then Minister-Ambassador Gasana went bananas. He told the US Ambassador at the UN not “confuse her name with her assignment.”

“Ms Power doesn’t have power over Rwanda” — Gasana uttered, calling the US criticisms of Kagame “unacceptable.” Gasana added that Kagame is a “very precious man” and “our hero.” At this point Gasana turned toward the US delegation in the Security Council chamber and lectured its members — “Don’t ever dare, ever, to treat [Kagame] that way.”

Gasana threw diplomacy out of the window. This Minister-Ambassador is bombastic. Back in January 2014 during debates on Rwanda’s support to M23, Minister-Ambassador Gasana called the Congolese government “crying babies.” Said Gasana: “These guys (Congo), just every other day, coming and crying like small babies….Rwanda, it’s a small country. Congo is rich. Congo has everything. How come Rwanda is always the scapegoat?”

You cannot say that our banana republic is boring — to the contrary, we go bananas every other day. Our Banana Republic's Minister-Ambassador At The United Nations Goes Bananas

His name is Eugène-Richard Gasana. He is the current Permanent Representative of Rwanda to the United Nations in New York City. Previously, Gasana has been the Ambassador Extraordinary and ...