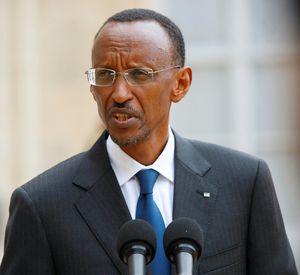 G. Support to CNDP by the Government of Rwanda

61. The Group has investigated allegations that the Government of Rwanda is providing support to CNDP. It has found evidence that the Rwandan authorities have been complicit in the recruitment of soldiers, including children, have facilitated the supply of military equipment, and have sent officers and units from the Rwandan Defence Force (RDF) to the Democratic Republic of the Congo in support of CNDP.

62. Given the nature of the support, there is little documentation available to prove Rwandan material support to CNDP. The Group has based its research on dozens of interviews with eyewitnesses to this collaboration, including former CNDP combatants and officers, members of the business community, regional intelligence officials and local eyewitnesses. These testimonies have been consistent and credible in describing the involvement of the Government of Rwanda.

63. CNDP operates recruitment networks in Rwanda. In some cases, there has reportedly been complicity by Rwandan officials in this recruitment. At the very least, it is clear that the Rwandan Government could do more to shut down these recruitment activities. Following are some examples of recruitment:

(a) Between January 2007 and October 2008, MONUC repatriated over 150 Rwandans, including 29 children, most of whom had been recruited by CNDP in Rwanda in 2007 or 2008. The Group interviewed 20 of the ex-combatants before

they returned to Rwanda and obtained MONUC files for 15 additional individuals.

The Group believes that these deserters represent only a fraction of the total number of soldiers recruited in Rwanda;

(b) Most were recruited by Rwandan or Congolese individuals in civilian dress. Some of the recruiters were reportedly former Rwandan army officers. Most ex-combatants said they had joined for financial reasons: they were promised large amounts of money, between $100 and $500 per month, but when they arrived in the Democratic Republic of the Congo they never received a salary and living conditions were very difficult. Several of those interviewed were captured by force by men in civilian dress;

(c) According to a dozen of these recruits, there have been incidents indicating complicity by the Rwandan authorities in their recruitment. A 12-year-old from Nkamira testified to MONUC that, “I was caught [in July 2007] while guarding cattle in our pasture in Nkamira by five armed men in military uniforms supposed to be RDF [Rwandan Defence Force], but surprisingly they came along with us and 15 others to Kilolirwe (in the Congo) via the Virunga park”;

(d) Three ex-combatants testified that they had passed through the Rwandan immigration services without having their documents checked, adding that the border officials knew their recruiter. On the other side of the border, they had bribed the Democratic Republic of the Congo officials;

(e) While many new recruits pass through Goma on their way to training camps in Masisi, others pass through the Volcanoes National Park in northwestern Rwanda. There the ex-combatants cross into the Democratic Republic of the Congo on the southern slope of the Sabinyo volcano. These forest paths are well known to locals. The Rwandan army has a military base in Kinigi, close to the Volcanoes National Park, and regularly patrols the park, but has never, as far as the Group knows, arrested any of these CNDP recruits;

(f) According to a recorded interview with a former Congolese CNDP combatant, a 16-year-old from Tongo, “We used to get new recruits from Rwanda, we went to pick them up at border in park, by Sabinyo volcano. The Rwandan army

brought these recruits, including children, to the border and then went back”. Two other former CNDP officers have given similar testimonies;

(g) In one case, Rwandan officers were reportedly present during the recruitment; in another, Rwandan military trucks were allegedly used to transport the recruits from Ruhengeri to Gisenyi, from where they crossed the border on foot;

(h) According to information obtained by the Group, CNDP has continued recruiting in the Kiziba refugee camp in Rwanda, home to roughly 16,000 Congolese refugees. According to several sources, Rwandan police or administrative

officials have reportedly been present during the recruitment at times. These reports are very similar to recruitment drives documented in the January 2005 report of the Group of Experts (S/2005/30). The Group officially asked the Rwandan authorities for access to the camp on 8 October 2008 and is currently scheduling such a visit.

64. As mentioned above, numerous former CNDP combatants, both Congolese and Rwandan, have testified that RDF officers and units provide support to CNDP on Congolese territory:

(a) The Group has received numerous reports of RDF presence within CNDP and RDF units deployed in support of CNDP. Eight former CNDP combatants have testified to the Group that there were active RDF officers or units supporting CNDP.

In one case, a Rwandan former-CNDP soldier told the Group in a recorded interview that he had recognized his uncle, a second lieutenant in RDF, who had told him that he was still receiving his RDF salary. In six other cases, CNDP ex-combatants informed the Group that their commanding officer had told them that they were receiving support from Rwanda; several of them saw small formed Rwandan units enter the Democratic Republic of the Congo in support of CNDP;

(b) The path the infiltrations take through the park is usually from Njerima on the Rwandan border through Kabara, Bitsitsi, Magarure, Nyesisi, Bukima, and Runyoni to Chanzo, or directly from Kinigi in Rwanda through the park to Sabinyo and then Chanzo;

(c) The Group has recorded an interview with a Congolese farmer, who was cutting bamboo on 10 June 2008 at Ruhungeta in the Virunga National Park when he was taken captive by around 100 troops coming across the border from Rwanda. Ruhungeta is 2 kilometres from the Rwandan border, and he said it was clear that that was where they were coming from. By their accent he recognized them as Rwandans. They were all armed and wearing military uniforms. He was held captive there until 30 June 2008, when he managed to escape;

(d) According to MONUC reports and local sources interviewed by the Group, an RDF battalion based on the other side of the border from Kibumba (Rutshuru territory) has made several targeted strikes into territory of the Democratic Republic of the Congo against FDLR positions close to the border. On 1 May 2008, around 10 RDF soldiers crossed the border to Ruhunda market and abducted an FDLR officer, Captain Kasereka, after killing the FARDC soldier Issa

Molimo from the 83rd brigade. The Group received confirmation regarding this incident from MONUC and the local population. The second incident took place in August 2008, when a group of RDF soldiers injured an FDLR commander and the woman he was staying with.

65. The Group has obtained satellite phone records for members of CNDP and the FRF leadership for the period of August 2007 to September 2008. It is clear from these records that both groups, particularly FRF, make and receive calls to and from the RDF high military command and the Rwandan presidency. While the Group cannot be sure of the content of the telephone calls, they are frequent and long enough to indicate at least extensive sharing of information. The Group has archived these records at the United Nations.

66. The Group has evidence that indicates that RDF provided support to CNDP during their recent offensive of 26 to 30 October 2008:

(a) According to four separate interviews with eyewitnesses from Gasizi and Ruhunda, Congolese villages located along the Rwandan border directly to the east of Kibumba, at least two Rwandan tanks were deployed to the Kabuhanga border crossing on 25 or 26 October 2008. The Group visited this border post later and saw that it overlooks the Kibumba refugee camp and that tank fire could have reached the Kanyamahoro FARDC headquarters of the 83rd brigade;

(b) The same local sources consistently reported that on 25 and 26 October 2008, they saw troops crossing from Rwanda through Kikeri and Mashahi forest area in support of CNDP advance. The Group was unable to ascertain whether these were RDF or CNDP troops, but the sources were certain they came from Rwandan territory;

(c) Following skirmishes between FARDC and CNDP on 25 October 2008, CNDP launched a major offensive against FARDC, capturing the Rumangabo military camp for a second time in a month and pushing towards Goma. On 28 October 2008, FARDC, together with MONUC attack helicopters, pushed CNDP back just north of the Kibumba internally displaced person camp. However, the following day CNDP renewed its offensive with greater firepower on its southern front by Kibumba, as well as on its northern front by Rubare. Some foreign military officers deployed in the field concluded that this greater firepower was due to external support;

(d) On 29 October 2008, senior MONUC officers and foreign journalists witnessed tank and mortar fire in support of the CNDP advance coming from the Rwandan border around Kabuhanga. According to locals interviewed by the Group, this was not an area previously under the control of CNDP, and it is likely that these weapons were transported there through Rwandan territory;

(e) During the afternoon of 29 October 2008, MONUC reported that one of its attack helicopters deployed around Kibumba had received anti-aircraft fire from the direction of the Rwandan border. While CNDP is in possession of anti-aircraft guns — the Group observed one deployed at Kabuhanga on 9 November 2008 — the direction the fire was coming from and the heavy nature of the artillery suggests that it was transported there by road. At that point, all road access to the Ruhunda.

Kabuhanga area was under the control of FARDC except for the roads through Rwanda. It is likely that the anti-aircraft gun was transported there through Rwandan territory;

(f) According to senior MONUC and FARDC sources, the tank and mortar fire was instrumental in breaking the FARDC defence and scattering FARDC forces as CNDP advanced towards Goma.

67. On 9 November 2008, members of the Group saw General Bosco Ntaganda, the CNDP chief of staff, crossing the Kabuhanga border and getting out from a Land Rover Defender jeep with a dozen soldiers. He was coming from a neutral zone, 1 to 2 kilometres wide, between the Rwandan and Congolese border. While the Group was not allowed to pass the Democratic Republic of the Congo border to see what lay beyond, locals informed the Group that the road did not lead anywhere else besides the Rwandan border. The Group believes that it is very likely that General Ntaganda was coming from Rwandan territory.

68. Rwanda has also been a rear base for CNDP in other ways:

(a) As explained above, bank accounts that CNDP uses for financing are located in Rwanda;

(b) CNDP officials have houses and families in Rwanda, whom they visit.

CNDP delegates meet regularly with embassies there, despite the Nairobi communiqué, in which the Government of Rwanda pledged to prevent the entry into and exit from its territory of members of CNDP;

(c) The Group was informed, including by CNDP operatives and local businessmen, of fund-raising meetings held in Gisenyi on a regular basis, especially during the offensive on Goma in late October 2008;

(d) The CNDP leadership uses a series of around 30 consecutive MTN Rwandacell telephone numbers for much of their communication. Until September 2008, when the transmission towers were disabled, Rwandacell phones could operate on their Supercell sister network that operated in Masisi and Rutshuru (Democratic Republic of the Congo). CNDP regularly buys or is sent credit for these telephones through representatives in Rwanda. According to documents that the Group has obtained, one of the satellite telephones CNDP uses was issued to an individual, Lambert Amahoro, based in Kigali;

(e) As explained above, some of the trucks that supply CNDP with fuel and goods are registered in Rwanda;

(f) The Group has provided detailed information on these activities to the Rwandan authorities and requested information regarding the telephone numbers, bank accounts and trucks. The Group received a response from the Government of Rwanda on 19 November 2008, which the Group will follow up.