http://therisingcontinent.wordpress.com/2013/03/28/congolese-women-against-genocide-in-drc/#more-3777
Congolese women against genocide in DRC
Posted on March 28, 2013 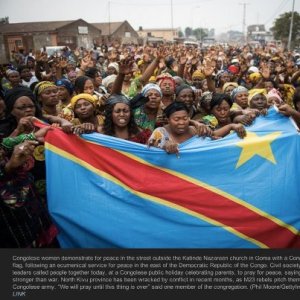 Congolese women protesting against Rwandan support to M23 in Goma – Eastern Congo.
“No brutality, no agony, no torture has ever driven me to beg for mercy, for I would rather die with my head high, my faith unshaken, and a profound trust in the destiny of my country, than live in subjection, seeing principles that are sacred to me laughed to scorn. History will have its say one day.” Patrice Emery Lumumba
Congolese women denounce consumed and ongoing genocide of their compatriots since 1996. The following is a memorandum which condemns international crimes committed in the DRCongo and neo-colonial policies imposed on local populations.