Kenya's new President William Ruto was sworn in on Tuesday in a ceremony attended by tens of thousands of his supporters. The previous deputy president has become the fifth person to hold the ...

A week after the Supreme Court confirmed his win, William Ruto has been inaugurated as Kenya's fifth president. Tens of thousands of supporters showed up for the ceremony.

Kenya's new President William Ruto was sworn in on Tuesday in a ceremony attended by tens of thousands of his supporters.
The previous deputy president has become the fifth person to hold the country's presidency following a divisive vote that he only narrowly clinched on August 9.
His win was confirmed by the Supreme Court last week. Former President Uhuru Kenyatta, under whom he had previously served, had publicly backed opposition leader Raila Odinga.
"You will be president not just for those who voted for you but for all Kenyans," Kenyatta told Ruto on the eve of his inauguration, appearing to put aside the previous falling out.

What happened at the inauguration ceremony?

The 60,000-capacity Kasarani Sports Center in Nairobi had already filled up by 5 a.m., according to the police.
Crowds continued to try and enter despite calls for people to stay home. Scores of people were reportedly injured in the crush.
"We had to treat some with minor injuries. Most of them were rushed to the main hospital in Nairobi," a medic told Associated Press.
The audience cheered as the 55-year-old Ruto and Kenyatta shook hands, sealing the transition of power.
Both men have been indicted by the International Criminal Court over the deadly violence that erupted following the 2007 election. Charges were later dropped.
This year's election was peaceful, marred only by opposition supporters trying

What is Ruto facing as president?

The Kenya that Ruto now leads is burdened by large amounts of debt, which he will have to deal with while also fulfilling his promises to the country's poorest.
His campaign focused on his background as a roadside chicken seller, distinguishing him from the powerful political dynasties of Kenyatta and Odinga.
Despite his mentorship by Kenya's prior strongman ruler President Daniel arap Moi, Ruto has pledged not to retaliate against the opposition and their claims of a stolen election.
Odinga accepted the decision by the Supreme Court, but the 77-year-old stayed away from Tuesday's inauguration ceremony.
Odinga has run for the position five times. His refusal to accept defeat in 2007 and 2017 was believed to be partly responsible for the violence that followed those elections.
ab/aw (Reuters, AP) 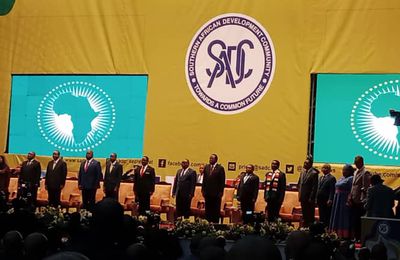