By Michelle Nichols and Louis Charbonneau 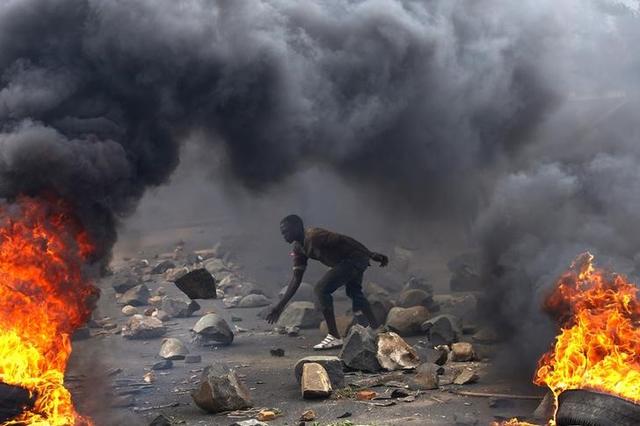 A protester sets up a barricade during a protest against Burundi President Pierre Nkurunziza in Bujumbura, Burundi, May 22, 2015. Reuters/Goran Tomasevic/Files

The report by experts who monitor sanctions on Democratic Republic of Congo, which was seen by Reuters on Wednesday, contained the strongest testimony yet that Rwanda is meddling in Burundi affairs and comes amid fears that worsening political violence could escalate into mass atrocities.

The report cites accounts from several rebel fighters, who told the sanctions monitors the training was done in a forest camp in Rwanda.

Nkurunziza's re-election for a third term last year sparked the country's crisis and raised concerns that there could be a bloody ethnic conflict in a region where memories of Rwanda's 1994 genocide are still fresh.

The experts said in the report that they had spoken with 18 Burundian combatants in eastern Congo's South Kivu province.

"They all told the group that they had been recruited in the Mahama Refugee Camp in eastern Rwanda in May and June 2015 and were given two months of military training by instructors, who included Rwandan military personnel," according to the report.

The Burundian combatants, which included six children, told the U.N. experts they were trained in military tactics, use of assault rifles and machine guns, grenades, anti-personnel and anti-tank mines, mortars and rocket-propelled grenades.

They said there were at least four companies of 100 recruits each being trained in a forest camp while they were there.

"They were transported around Rwanda in the back of military trucks, often with Rwandan military escort," the U.N. experts wrote. "They reported that their ultimate goal was to remove Burundian President Pierre Nkurunziza from power."

Burundi and Rwanda have the same ethnic mix, about 85 percent Hutus and 15 percent Tutsis. A 12-year civil war in Burundi, which ended in 2005, pitted a Tutsi-led army against Hutu rebel groups.

Rwandan U.N. Ambassador Eugene Gasana dismissed the accusations against Kigali contained in the report and told Reuters, "This further undermines the credibility of the Group of Experts, which seems to have extended its own mandate, but apparently investigating Burundi."

The U.N. report did not say why the Burundian fighters had crossed into Congo. But Russia's Deputy U.N. Ambassador Petr Iliichev said last month that there had been reports of Burundian rebels trying to recruit more fighters in Congo.

"The Burundian combatants showed the group fake DRC identification cards that had been produced for them in Rwanda, so they could avoid suspicion while in the DRC," the report said.

Burundi accused Rwanda in December of supporting a rebel group that was recruiting Burundian refugees on Rwandan soil, but Rwandan President Paul Kagame dismissed the allegations as "childish."

The accusations by Burundi were prompted by the charity Refugees International, which said in a December report it was "deeply concerned" by claims of Burundian refugees in Rwanda that they were being recruited by "non-state armed groups".

The U.N. Security Council traveled to Burundi in late January, its second visit to the country in less than 10 months. The United Nations has estimated the death toll at 439 people but has said it could be higher. More than 240,000 people have fled abroad and the country's economy is in crisis.

U.S. Ambassador to the United Nations Samantha Power said during the visit to Burundi that the 15-member council had expressed concern about the allegations of external interference.