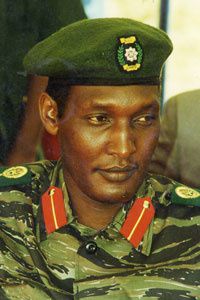 A week after President Paul Kagame of Rwanda accused former army chief of staff Lt. Gen. Kayumba Nyamwasa and former intelligence boss Col. Patrick Karegeya of running away from accountability, the two officials, who live in exile in South Africa, give their side of the story in a statement emailed to Sunday Monitor by LT. GEN NYAMWASA.


“When I left Rwanda, my intention was to reunite my family, start a new life. Forget politics, the military and diplomacy –areas where I had previously served. I thought I would go into academics, consultancy or something different and actually take a lasting holiday from President Kagame with whom I had served for the last 16 years. Unfortunately, this was not to be. My name is always in the media for all wrong reasons.


After my departure, President Kagame addressed a press conference where he labelled Patrick Karegeya and I as terrorists; while passing out cadets officers in Gako, he called us thieves; in Parliament he called us flies whom he will crush with a hammer; with Jeune Afrique he called me a traitor and with Monitor he called us reckless unaccountable officers.


For purposes of clarity and for the sake of our families, friends, countrymen and all those who read your publication, I am forced to respond to put the record straight. In my presentation, I may make comparisons and analogies but they are by no means intended to offend. Otherwise silence may mean consent.


President Kagame is not honest when he alleges that we ran away from accountability. [Our] disagreements [are] centred on governance, tolerance, insensitivity, intrigue and betrayal of our colleagues.


Furthermore, it is my considered opinion and strong convictions that we struggled for a country where there would be freedom of speech and association. On the contrary, towards the end of the last century, these ideals started shifting and the focus was no longer the country and Party but President Kagame.


This phenomenon was nurtured and promoted by opportunists and sycophants. I despised the trend of events and the category of people involved. The meeting prior to my departure was despicable and I held a number of people involved in contempt having transformed the RPF into a party where its main pre-occupation is furthering intrigue and hatred.


President Kagame should have told you that in 2003, together with another colleague, we asked to leave the Army and Government because we felt we did not fit in the scheme of things. He objected and expressed fear that if we left – we would cause trouble outside. I kept soldiering on hoping that there would be some sense of reason and may be things may change somehow. In retrospect, maybe I was naive or trusted too much or continued in self-denial like some of my friends are today.


I would wish to illustrate my point as follows: Firstly since President Kagame likes to talk about accountability to institutions, I would expect him to have appeared before Parliament to account for owning two XR Executive Jets which he hires to himself and makes at least two trips to America a month to receive fictitious honours, doctorates for himself and his wife or visiting his children.


The minimum cost for each trip is close to $1 million. The two aircraft were bought by government money and registered in the names of a pseudo company. He should appear before the Ombudsman together with his adviser and an embassy official to explain where they got $100 million to buy the two executive aircrafts. The minister of finance should tell Parliament why government should service privately-owned aircraft. Does this reflect zero tolerance of corruption which the President constantly enforces? [The Rwandan government says it leases the jets from a private company in which private Rwandan nationals own a stake – Editor]. Secondly President Kagame should explain to Parliament who is the owner of the embassy building in London and his connection with the company in whose names the embassy building is registered.


Thirdly he should explain to the party and to the people of Rwanda why he heads a party without a treasurer and how much money RPF has since it owns all the biggest companies in the country and contributions of party members.


Fourthly, why was Arab Contractors simultaneously constructing his private residence in Muhazi together with the Ministry of Defence using government facilities? Minister Bikoro had to account for one container of tiles, how much money did President Kagame pay to Rwanda Revenue Authority for construction materials for his own houses?


President Kagame’s accountability demands are a farce, demagogue and playing to the gallery. Of course acting tough and ‘spitting fire’ insulates him from the inquisitive eye. However, everyone knows it is meant to intimidate, dupe the international community and create impressions for donors. To sustain all this, he employs intrigue, treachery, manipulation and betrayal. This was my point of departure.


As far as I am concerned, I always made sure that my property declaration forms were submitted to the Ombudsman on time and fortunately I have all the receipts to that effect. I have never appeared on the list of government officials suspended for lack of accountability. President Kagame would have been too happy to have me arrested if there was any irregularity in my declarations.


President Kagame is on record commending me as an exemplary officer when I was Army Chief of Staff and served for uninterrupted five years as ambassador in India. At what stage did I become an unaccountable officer and terrorist? How can he turn around to ask for accountability after 10 years? Col. Karegeya served as intelligence chief for an uninterrupted 10 years. President Kagame called him nothing, useless and now terrorist! At what stage did President Kagame learn that Col. Karegeya was useless and nothing after all those years? The people of Rwanda are used to this mudslinging. Last month he appointed Commander of the Reserve Force and arrested him for abuse of office after one week. When did investigations take place? Another general is arrested for committing immoral acts – who is the complainant?


During President Kayibanda’s regime [1962 – 1973], political dissenters were labelled ideological traitors. Later, President Habyarimana [1973 – 1994] would say that those escaping to exile were afraid of peace and tranquillity. In the 1980s President Habyarimana would remind Rwandans and the international community that his government was registering the highest GDP in the region, an island of peace and no one should talk about the democratic deficit that existed.


These days President Kagame accuses his perceived opponents of genocide ideology or terrorism and corruption. Everyone is expected to sing that Kigali is clean and we have developed. Do we develop without consciousness? I am afraid Rwanda has not changed a bit in terms of leadership.


President Kagame has personalised the Gen. Kayumba/Col. Karegeya issue. This is out of a guilty conscience. If people who participated in the struggle from day one and served at the highest level of the Army and Security are not colleagues in the Rwandan context, who is? President Kagame questions if he is running a dictatorship why was I not arrested straight away.


Since he said this in the Monitor largely for the Ugandan readership, let me remind you that before Ben Kiwanuka died [in 1972], he had met Amin and so did Bishop Luwum. Since Amin met these two and others before killing them does it make him a democrat? Does Kagame imply that those who run away from Amin in 1978 had no justification and should have stayed? Furthermore, he alleges that the people who run away from 1995 and 1996 were maybe running away from me. Does he imply that he was not in charge at that time? Now that I have gone, let us see if there will be an exodus of returnees from exile. Kagame talks like someone who is wronged and aggrieved.


How does he justify the incarceration of my wife and children in New Delhi, evicting them out of the embassy residence and dispossessing them of passports containing the multiple entry visas? To which institution did they have to account? If he had problems with me, what about my family?


While he was doing that to my family he was preparing a very expensive journey to West Point [military academy in New York] to see his son funded by a government we both worked to put in power. The irony is that in Rwanda there is only one family!.


I saved President Kagame’s life twice during the struggle when everyone else had abandoned him in Nkana and Kanyantanga. Where were all those who are telling him that I am a traitor? History will tell who betrayed who. Those who served with us know the truth including those who opportunistically vilify me most.


President Kagame said he does not understand and cannot put his finger on the reasons why people run to exile. Surely the President must be having a very short memory; his entire family spent more than 30 years in exile. Does he insinuate that his parents were adventurers when they left Rwanda and somehow they gained their senses after 1994?


The answer is simple. In a democracy, people resort to courts of law for conflict resolution and in a dictatorship, people run for their dear lives. If a leader does not know why his/her citizens are running away then he is incapable of governing.”