By Katrina Manson in Nairobi and Matt Steinglass in Amsterdam 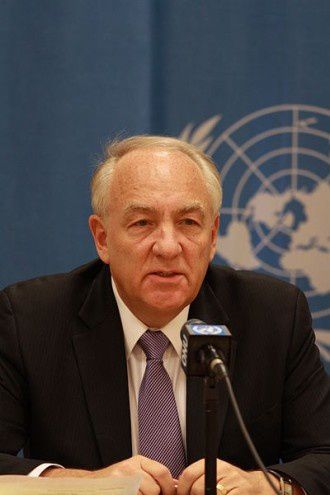 A senior US official has said Rwanda President Paul Kagame could face war crimes charges for his country’s role in supporting rebels in eastern Democratic Republic of Congo.

Stephen Rapp, head of the US Office of Global Criminal Justice, said Mr Kagame could be liable for “aiding and abetting” rebels before the International Criminal Court in The Hague.

Mr Kagame responded to the comments on Twitter: “They [the ICC] have never done justice anywhere ... all are just false claims of righteousness used to dominate ... by some!”

For the ICC to launch an investigation a case would have to be referred either the country where the alleged crimes have been committed or by the UN Security Council. The ICC already has an active case open in Congo so it would be down to the ICC prosecutor to pursue any new case.

Neither the US nor Rwanda are members of the ICC, but the comments by Mr Rapp, who was chief prosecutor at the Special Court for Sierra Leone, are a warning from the US that Rwanda’s alleged support for the rebellion in eastern Congo is testing US and international patience.

The ICC had no information on the claims, made in the Guardian newspaper on Wednesday, but did not rule out prosecutions of members of Rwanda’s senior elite.

“If persons who are not Congolese are suspected of being involved in crimes committed on the territory of the DRC, then the prosecutor can ask the ICC judges to call them to appear before the court, or to issue an arrest warrant,” a spokesman for the prosecution told the FT.

A spate of rebel attacks in DR Congo’s violent east since April has elicited heavy criticism of Rwanda. A UN report last month accused it of providing the rebels with weapons, ammunition and support. Fighting, which has already forced thousands to flee, continued on Wednesday when rebels exchanged fire with the national army 25km outside the regional capital Goma, site of a UN peacekeeping base.

Rwanda has long been a darling of western donors, eliciting hundreds of millions of dollars from countries keen to help it recover from a 1994 genocide in which more than 800,000 were killed. But critics claim they have overlooked Kigali’s poor human rights record and disregard for Congolese sovereignty.

A US decision to cut $200,000 in military aid for Rwanda last weekend marked the greatest pressure on Mr Kagame’s regime in years.

The US based its decision on the UN report’s claims that Rwanda helped create the rebel group, known as M23, and is violating an UN arms embargo and sanctions regime against rebels In DR Congo.

“The [UN] Group has gathered overwhelming evidence demonstrating that senior RDF officers, in their official capacities, have been backstopping the rebels through providing weapons, military supplies, and new recruits,” said the UN report of June 27, which says Rwanda has also sent its own army into Congolese territory to reinforce M23.

M23 is a breakaway group of soldiers and former rebels associated with Colonel Sultani Makenga and General Bosco Ntaganda. The latter is wanted by the ICC on war crimes charges.

Andrew Mitchell, the UK international development secretary, who says he has given “frank messages” to Congo and Rwanda, has not indicated whether the UK, one of the biggest donors to Mr Kigame’s government, will follow the US and cut aid to Kigali. The UK will give £80m to Rwanda this year, rising to £90m in two years’ time.

“That [the US decision] leaves the UK sitting out on a limb by themselves and they should not feel comfortable about that,” said Anneke Van Woudenberg, Human Rights Watch Congo expert.

The European Union earlier this year increased its five-year aid programme to Rwanda by 30 per cent, citing the country’s “exemplary progress”. Asked on Wednesday whether there had been any change to its funding, an official said that at the moment no decisions on development aid had been taken.

Louise Mushikiwabo, Rwanda’s foreign affairs minister, has said the US decision to cut its aid was “ill-informed” and that she intends to rebut the UN evidence.

“As we have made clear from the outset, Rwanda is neither the cause nor the enabler of instability in the eastern DRC,” she said in a statement published on a government website, promising to “debunk them [the allegations] line by line” in meetings with the UN group of experts this week.