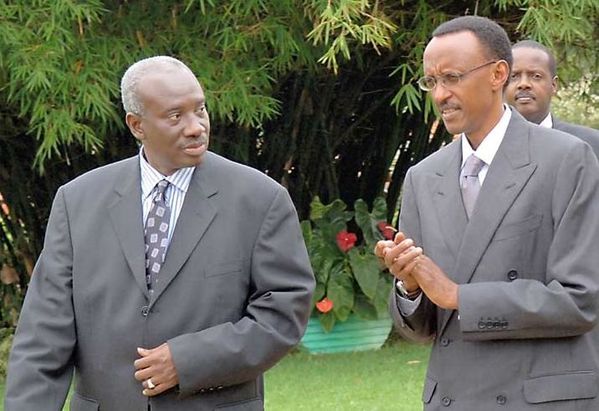 Paul Kagame can count on Tony Blair as one of his strongest supporters. Photograph: Wpa Pool/Getty Images

The head of the US war crimes office has warned Rwanda's leaders, including President Paul Kagame, that they could face prosecution at the international criminal court for arming groups responsible for atrocities in the Democratic Republic of Congo.

Stephen Rapp, who leads the US Office of Global Criminal Justice, told the Guardian the Rwandan leadership may be open to charges of "aiding and abetting" crimes against humanity in a neighbouring country – actions similar to those for which the former Liberian president, Charles Taylor, was jailed for 50 years by an international court in May.

Rapp's warning follows a damning United Nations report on recent Rwandan military support for M23, an insurgent group that has driven hundreds of thousands of people from their homes since April as it has seized territory in the eastern DRC.

The group is led by Bosco Ntaganda, known as the Terminator, who was indicted by the international criminal court six years ago for war crimes including the forced recruitment of child soldiers. The UN report accuses Rwanda of shielding Ntaganda from justice.

On Saturday, Washington said it would halt some military aid to Rwanda after the UN report.

The aid freeze and Rapp's public intervention mark a significant shift away from once-solid US support for Kagame, which was rooted in lingering guilt over international inaction during the 1994 genocide of Rwandan Tutsis.

Rapp, who previously served as chief prosecutor at the Rwanda genocide tribunal and later initiated the prosecution of Taylor over his crimes as president of Liberia in supporting rebels in neighbouring Sierra Leone, said Rwandan support for M23 and other armed groups "has to stop" because it "maintains the lawlessness and at the end of the day enables the ongoing commission of atrocities".

"There is a line that one can cross under international law where you can be held responsible for aiding a group in a way that makes possible their commission of atrocities," he said.

"Charles Taylor never set foot in Sierra Leone, and aided and abetted, and was convicted of aiding and abetting, the Revolutionary United Front with assistance that was substantial and, the judges said, without which the RUF could not have committed the atrocities to the extent they did commit them. Because of that evidence, Charles Taylor was convicted and sentenced to 50 years."

Rapp said the evidence by the UN group of experts of Rwandan government support for M23 and other armed groups, including sending weapons and troops into the DRC, exposed Kagame and other senior officials to investigation for war crimes.

"At this stage, I'm not sure if we are there in terms of criminal conduct," he said. "But if this kind of thing continued and groups that were being armed were committing crimes … then I think you would have a situation where individuals who were aiding them from across the border could be held criminally responsible."

The UN report, by a group of experts appointed by the security council, said it had "found substantial evidence attesting to support from Rwandan officials to armed groups operating in the eastern DRC", including shipping weapons and money to M23 in breach of a UN arms embargo and other sanctions.

"Since the earliest stages of its inception, the group documented a systematic pattern of military and political support provided to the M23 rebellion by Rwandan authorities," it said.

The report said the Rwandan government gave "direct assistance in the creation of M23 through the transport of weapons and soldiers through Rwandan territory", and recruited Rwandan youths, demobilised ex-combatants and Congolese refugees as M23 fighters.

"RDF operational units are periodically reinforcing the M23 on the battlefield against the Congolese army," it said.

Many M23 members formerly served in another Rwandan-backed militia, the National Congress for the Defence of the People (CNDP), which was responsible along with other militias for widespread atrocities over several years, including ethnic killings and mass rape. Ntaganda was the CNDP's military chief.

The experts accuse Rwanda of shielding Ntaganda from prosecution by the ICC for war crimes.

"Rwandan officials have insisted on impunity for their armed group and mutineer allies, including ex-CNDP General Bosco Ntaganda," they said.

Earlier this week, Kagame denounced western criticism of Rwanda's role in the DRC and blamed the continuing conflict on foreign powers that "don't listen", as well as the continuing threat from anti-Tutsi extremist forces, led by Hutus responsible for the 1994 genocide.

"This problem has not been caused by Rwanda and it has not been abetted by Rwanda," said Kagame. "Actually the problem of DRC came from outside. It was created by the international community, our partners, because they don't listen … and in the end they don't actually provide a solution. They just keep creating problems for us. We know better our problems, we know better about this region's problems."

"The international community was saying that Rwanda is helping rebels, but helping them with what, and for what reason? They say we supply them with ammunition, but these people get guns from the Congolese army. The ammunition they have is from their Congolese armouries," he said. "We are not supplying even one bullet, we have not and we will not."

Kagame rejected accusations that Rwanda is shielding Ntaganda from the ICC. He said he told DRC's government that it should deal with the renegade general, but warned that arresting Ntaganda would only create more conflict.

"After that, members of the international community developed an idea that if Rwanda can't support them to arrest someone in another country, then they would put us together with those they want to arrest, and this is really how it turned out to be," he said.

The Rwandan leadership has faced accusations from the UN before, but the latest report has exposed it to unusual public criticism from Washington.

"We have a lot of influence with the Rwandans. We've been very supportive of them. We're prepared to speak frankly to them as we have privately in the past, and now publicly," Rapp said. "M23 was reinforced by Rwanda, and that has to stop. And that's the message we're delivering."

The US and Britain have long been accused of shielding Kagame from criticism over Rwanda's support for armed groups in the DRC and its plunder of minerals there.

Tony Blair, the former British prime minister, has been among the Rwandan president's strongest supporters, praising him as a "visionary leader" for the reconstruction and economic development of his country after the genocide.

Rwanda's invasion of what was then Zaire in 1996 to clear out refugee camps sheltering armed groups responsible for the genocide two years earlier was quietly backed by Washington and London, which did not challenge a second invasion two years later and Kigali's attempt to create a proxy administration in eastern DRC using loyal armed groups.

But the solid public support of Kagame grew increasingly difficult to defend given the scale of the suffering in DRC, with hundreds of thousands murdered and millions dying from disease and malnutrition caused by the conflict, and untold numbers of women raped, often repeatedly.

Earlier UN reports accused Kagame's forces of war crimes, including possibly genocide, in the eastern DRC. Others have criticised the increasingly authoritarian nature of the Rwandan president's rule, including the effective barring of political opposition.