Hungry for Truth, Peace and Justice Rwanda: Paul Kagame is implicated in war crimes and crimes against humanity

The following is a non-exhaustive list of cases in which Paul Kagame and his collaborators are implicated in war crimes and crimes against humanity committed since 1991.

1. Systematic execution of the Hutu who attempted to join the RPA Military Training Wings for example in Nakivale, Gishuro, Karama and Gabiro from 1990 up to 1994.

2. Systematic massacres, laying of mines, looting of properties, demolition of homes and other building as well as destruction crops so as to displace the population and create an RPF/RPA controlled territory free of the Hutu. These crimes were carried out for example in the Districts of Muvumba, Ngarama, Bwisigye, Kiyombe, Mukarangye, Cyumba, Kibali, Kivuye, Cyungo, as well as in Kinigi, Butaro, Cyeru and Nyamugari from 1990 to 1992. Military operations were carried out against known civilian targets, in most cases peasants. Known Refugee Camps and densely populated villages and Towns were routinely shelled with 120 mmmotors, 107 mmrocked launchers and 122 mmguns mounted on hill tops overlooking such locations. Examples of these incidents include the shelling of Rwibare Refugee Camp in Muvumba, Kisaro Refugee Camp in Buyoga as well as Byumba and Ruhengeri Townsin 1991 and 1992.

3. When the Arusha Peace Talks for Rwandastarted in 1992, Paul Kagame launched a deliberate policy to create a Tutsi Landthrough Hutu massacres, massive population displacement, property appropriation and land grabbing in the North East, East, South East and in Central Rwanda. This is the policy we saw at work in 1993, 1994 and 1995.

4. Routine execution of Hutu prisoners of war between 1991 and 1994. The only exceptions being the ones kept alive for the purpose of show off to Journalists and for the exchange of prisoners of war with the Government side in the framework of the Arusha Peace Agreement.

5. Assassination of Hutu elites including members of the RPF/RPA like Member of High Command Muvunanyambo who was killed in 1992 as well as many civilian cadres recruited in the entire demilitarized zone in Northern Rwanda between 1992 and 1994. Once again, the districts most affected include Muvumba, Ngarama, Bwisigye, Kiyombe, Mukarangye, Cyumba, Kibali, Kivuye, Cyungo, Kinigi, Butaro, Cyeru and Nyamugari.

6. Periodic Revenge massacres against the Hutu population whenever the Regime in Kigalimassacred the Tutsi. For example such revenge massacres were carried out in the RPA Offensive of February 1993 covering the entire North of the Country. The offensive was launched over night, by morning several districts had been taken over by the RPA and in the hours and days that followed the Hutu were hunted and short at on sight. In one location in the District of Ngarama, at least 134 people were massacred and buried in shallow graves.

7. From 1992 up to 1994, politico-military cadres were infiltrated behind government lines to carry out terrorist activities especially in urban areas. From 28th December 1993 to 6th April 1994, this time using the RPA Unit in Kigali, more people were trained, arms distributed and an urban terrorist campaign launched against civilian targets in Kigali City. These terrorist groups, among others, targeted high profile politicians including the late President Juvenal Habyalimana, former Minister Gatabazi, Gapyisi and Martin Bucyana. For example President Habyalimana had been a target for assassination between January and April 1994 at a swearing ceremony of the Broad Based Transition Government scheduled to have taken place at the Parliamentary Buildings in Kigali.

8. Counter genocide massacres covering the entire Country from boarder to boarder were launched immediately the genocide started. All RPA Units were under orders to kill any Hutu on sight and for several months, many soldiers did kill as many Hutu as they could.

9. The massacre at Rwesero Seminary on 21 April 1994, which included seven priest who had taken refugee there.

10. The massacres at Kabgayi on 5th June 1994, which included three Catholic Bishops and other Church leaders.

11. The massacres by the RPA Kigali Battalion in the hours and days immediately following the launching of the genocide; for example the killing of Hutu families in locations north of Kigali City like Kimihurura and Remera.

12. The killing of Hutu families evacuated from Kigaliin April 1994 when a safe corridor had been created between Kigaliand RPF/RPA Headquarters in Byumba Town.

13. The massacres in the Province of Gitarama especially in the Districts of Masango, Mukingi, Mushubati and Tabwe. In the District of Masango alone, at least 500 peasants are estimated to have been massacred and buried in mass graves between July and August 1994.

14. The massacres carried out in Butale Province where the largest number of people killed was at a locality known as Kucya-Semakamba.

15. The massacres of internally displaced people in camps or in transit to their homes. The most widely known case is the Kibeho massacre at a UN protected Camp in which between 4,000-8,000 people lost their lives at the hands of an RPA Unit.

16. The Directorate of Military Intelligence from 1990 up to 1994 operated Hutu detention, torture, assassination and burial centers in different locations of the country. One of the most notorious locations was at Kinyami District Headquarters where at least hundreds of civilian Hutus were arrested, detained, tortured, killed and buried between April and July 1994.Bodies were exhumed in 1997 by the military, the remains were burnt with diesel and acid and disposed of in the Akagera National Park. Member of Parliament Evalist Burakari was assassinated because he was a witness. The victims, who were mostly Hutu elites, were picked especially from the Districts of Kibali, Buyoga, Kinyami, Rutare, Muhura and Giti.

17. Gabiro Barracks has since 1994 served as a Hutu killing ground. Every time there is a security crisis, the Hutu especially in urban areas and the Eastern parts of the Country, are rounded up, blindfolded, packed on lorries, transported to Gabiro Barracks and killed. The Barracks has specialized killers and tools including iron bars, acid, diesel and a caterpillar.

18. Counter Insurgency massacres carried out in the North West from 1995 up to 2001. Tens of thousands and may be hundreds of thousands of people have lost their lives at the hands of RPA Mobile Forces. Specific examples include the massacres carried out in Kanama District on 12th September 1995 in which 110 Hutu peasants were massacred in revenge for one Tutsi Officer killed by Hutu rebels. Many more massacres took place in the same locality especially between October and November 1997.

19. The massacre of a large number of people hiding in caves in the Ruhengeri-Gisenyi region during the counter insurgency operations of 1998. RPA Units sealed off the caves and massacred the refugees with explosives. Examples include the massacres in the caves of Bugoyi.

20. Massacres in containers. During routine security operations or counter insurgency operations, the Hutu are rounded up, their hands tied and the heads covered with air tight plastic materials. They are then loaded on to containers which are locked, driven to the Akagera National Park where they are parked under the direct sun and the victims left to die slowly due to congestion, heat, thirst and suffocation. Some of the supported of Former President Pasteur Bizimungu's Party rounded up in various locations of Gisenyi Province following his arrest were massacred in this manner.

22. The routine execution of genocidaires suspects in detention centers especially in 1997. RPA Units disguised as Hutu rebels attacked detention centers to kill detainees. Examples of such massacres include Bugarama Prison in Cyangugu on 14th April 1997, Muyira in Butare on the 14th of January 1997, Gisovu in Kibuye on the 23rd of January 1997, Runda in Gitarama on the 14th February 1997, Maraba in Butare on 7th May 1997, Gatonde in Ruhengeri in May 1997, Ndusu in Ruhengeri on 10th May 1997, and at Rubavu as well as at Kanama in the same year.

23. Execution of thousands of members of the Ex-FAR since 1994, having surrendered or returned from exile and sometimes with their entire families.

25. The massacre of Hutu refugees in the DRC between 1996 and 1997 including; about 8,000 by early December 1996 as the refugee camps in the Kivu region were destroyed; 250 ina forest at Musenge next to the Rwanda border at about the same time; 22,500 by the time some of the refugees reached Walikale, Masisi, Shabunda, the South Kivu Mountains and Kalemie in late December; 300 at Mboko and several hundred others at Moba at about the same time; 135, 000 from Walikale and Masisi in transit to Amisi and Tingi-Tingi in mid January; 24,500 in the Shabarabe-Kalima-Tshimanga-Shabunda area on their way to Kalemie in early February; 55,000 from Amisi and Tingi-Tingi to Ubundu by late February, 40,000 in the camps of Kisesa and Biaro near Kisangani between 21st and 26th April and 2,500 at Mbandaka and Wendji on 13th May 1997.

26. The massive looting of movable property, systematic demolition of buildings and appropriation of Hutu properties between 1990 and 1995. Since 1992, the RPF/RPA had a fully fledged department responsible for looting all movable property for immediate use or for sell. These properties ranged from food, medical supplies, to Computers and vehicles. Homes, Shops, MAGERWA National Warehouse, Ministries, NGOs and the UN were all massively looted. Collections centers for the loot included RPF General Headquarters at Rubaya in Commune Cyumba, Mulindi Tea Factory, Byumba Town, Rwagitima Trading Centerin District Gituza and Gabiro Barracks. In the case of buildings belonging to prominent Hutu, RPA Field Engineers were under instructions to demolition them. This was done in Kibungo Town, Remera in Kigali City and in Gitarama Town.

28. Paul Kagame has pursued a long term agenda to occupy East DRC and encourage its secession by creating so called Congolese rebels with a view to realizing perpetual control of the region so as to prevent independent investigation of war crimes and crimes against humanity committed against the Hutu Refugees in 1996/1997, for economic exploitation and for containing Paul Kagame's perceived Hutu military threats. This is precisely why Paul Kagame re-invaded the DRC in 1998 and indeed the very reason he has twice invaded that Country this year alone. This is the reason why Paul Kagame has just invaded the DRC again. We need to mention that complementary technical, political and economic measures aimed at informal integration of the economies of Rwandaand East DRC have been introduced since 1996.

29. Paul Kagame and his collaborators have since 1994, been deeply involved in fueling the conflict in Burundithrough direct incursions to fight alongside Tutsi soldiers and indirectly through the clandestine delivery of military supplies via Kanombe International Airportand by road to Bujumbura.

30. Paul Kagame has not only been responsible for the fighting between Uganda and Rwanda in Kisangani resulting into the death of many Congolese, Rwandese and Ugandans, but he has since the year 2000 actively supported Ugandan opposition politicians and politico-military groups like the Peoples Redemption Army engaged in military destabilization of Uganda. 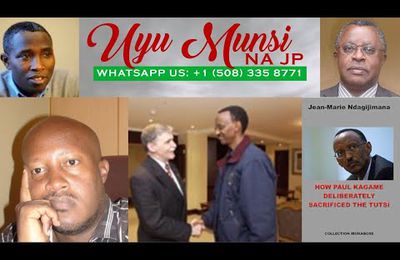