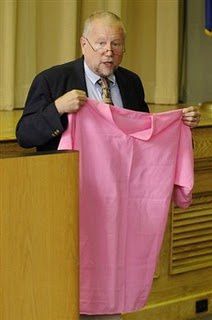 Since early 2010, American Lawyer Peter Erlinder has not had the best of relationships with United Nations or the Rwandan Government.Since 1982, Erlinder has been a professor at William Mitchell College of Law in Minnesota.

He has worked on the defense counsel on for many unpopular, and high-profile cases including the legal defense of Mohammed Abdullah Warsame, a Canadian citizen who in 2009 pleaded guilty in federal court in Minneapolis to aiding Al-Queda.

Other high profile-clients have included, Sami al-Arian, a former University of South Florida professor who pleaded guilty in 2006 to conspiring to aid terrorists. Either way records show a trend of defending those who are not exactly well-liked by the public.
However, this trend took a dangerous turn on May 28th of 2010 when Erlinder was arrested and charged with promotion of genocide ideology and denial by Rwanda National Police. On the Wednesday of the following week, police officials checking in on him in the morning found him unconscious overdosed with a handful of his own prescription drugs.
Erlinder was eventually officially announced as released on June 17th, 20 days later, for health reasons. He remained in King Faisal Hospital before and after announcement of the verdict, later returning to America for better medical services.
Most recently, in April of this year Erlinder returned to the headlines when he was barred by the United Nations from working at the International Criminal Tribunal for Rwanda after refusing to appear in court in Tanzania as defense counsel for major Rwandan genocide suspects, such as Victoire Ingabire. He now resides back in the U.S. as a law professor at William Mitchell College of Law in Minnesota.
Since this incident, Erlinder has been reprimanded for his behavior at the ICTR by the UN, ICTR officials as well as by Rwandan government officials that todate defend the arrest of Erlinder.
However, few have attempted to get the infamous lawyers side of the story and ask the man himself what exactly happened in his brush with Rwanda. Whether or not Erlinder displayed unprofessionalism during his work in Rwanda is difficult to judge, however, barely any stories exist containing his perspective.


In an exclusive interview with Igihe.com, Erlinder finally has spoken. Below we bring you excerpts of the raw interview.

Igihe.com: Why is it that you often take the defense cases for defendants that may be deemed "unpopular"?

Erlinder: he second President of the U.S. John Adams defended British Soldiers who killed American colonists, and won acquittals before an American jury "facts are stubborn things" without a vigorous defense of those the majority considers "unpopular" there is no democracy and Facts are Facts.

Igihe.com: What are the difficulties of defending such cases?

Erlinder: Being confused with one’s clients and discovering facts, those in power would prefer not to be known as John Adams said "facts are stubborn things."

Igihe.com: From your account what happened in 2010, and how did it affect the way you are viewed defending your particular clients?

Erlinder: It is not my account, the defense was based on original UN and USG documents in evidence at the ICTR which reports events in 1990-1995 that are completely the reverse of that told by those who won the war. This happens in all wars; the difference here is that the UN and USG have records that describe a different set of events....

Igihe.com: Do you feel that the Rwandan government had valid reason to this considering what happened in 1994?

Erlinder: The government and all who suffered in 1994 have valid reasons for explaining their views. I was not in Rwanda and cannot express an independent viewpoint.
I have reported only the judgment of the ICTR that the upper levels of the FAR were not engaged in a long term conspiracy to commit crimes against the civilian population before, or after April 1994, including genocide. This does not mean that such a conspiracy did not exist. Just that, after 15 years there was insufficient evidence to prove it in court when all evidence was considered, including UN and USG documents.

Igihe.com: Rwandan government spokeswoman Louise Mushikiwabo was quoted saying about your arrest, We understand that human rights activists schooled in the U.S. Bill of Rights may find this objectionable. But for Rwandans — schooled in the tragedy of the 1994 genocide — Mr. Erlinder’s arrest is an act of justice.

Erlinder: What is your response to this? Do you feel she has a point about differing views of justice? Every country makes its own laws, it is not my place to tell Rwanda what it’s laws should be. But, in the U.S had a law been passed that said only one side was responsible for all crimes in the U.S. civil war and the other side was the victims, it would not only have violated the U.S. constitution, but would have distorted history and prevented an honest discussion of how to reach reconciliation because there has never been a civil war in which only one side was the victim and the other the criminals, including U.S. civil war and WWI and II.

Igihe.com: What was your experience in jail like in Rwanda?

Erlinder: The individuals treated me well, in the context of RPF control of government and courts.

Igihe.com: Do you believe yourself as innocent when you were jailed? What did this reveal to you about the Rwandan government?

Erlinder: I wrote factually correct articles and statements in the U.S., in Europe, and the ICTR in English. ICTR was never accused of making any public statements in Rwanda. The question of guilt or innocence depends entirely upon how the Rwandan government decides to define the crime.

Igihe.com: Why did you refuse to appear to court in late April for the defense of your clients in Tanzania?

Erlinder: The ICTR record reflects that my co-counsel and I were under doctor’s orders not to travel for medical reasons, which were supplied to the Chamber confidentially long before the hearing.

Igihe.com: What has life been like since the UN barred you from the international tribunal?

Erlinder: I continue my normal work, being barred as punishment for following written physicians orders is viewed as bizarre in all normal legal systems and the first time it has occurred in any international tribunal, whichreflects badly on the ICTR, rather than me.

Igihe.com: Do you regret your actions at all? Why/Why not? Would you go back and change anything you did during that time?

Erlinder: I provided my credentials to Rwandan Embassy in DC before I left, informing of my mission, U.S. State Deptartment, Rwandan Justice Ministry Public Prosecution, etc. Had they preferred I not enter the country, they could have turned me away at the border because my entering Rwanda and my purpose was not a surprise and I attempted to behave in an open an professional manner. I made the mistake of thinking Rwanda would not claim criminal jurisdiction over writings/speeches in other countries, since I never said or did anything in Rwanda that violated Rwanda law and had not been in Rwanda since 2004. I was wrong.

Igihe.com: What is your work now?

Erlinder: The same as it has always been, the ICTR case had only 4 hours left to complete the 8-year case.

Igihe.com: What else do you feel is important for the public to know about your side of this story?

Erlinder: Of course...but I fear for anyone in Rwanda who reports accurately that the "genocide of Tutsi" story now memorialized by the RPF government does not explain the whole story of what happened in 1994 and the UN description of "a genocide of Tutsi and moderate Hutus" includes Hutus as victims and can only be a "genocide" if they were killed by perpetrators other than Hutus, not just according to me, but according to the UN, and the details are explained in the documentary evidence in the Military 1-2 cases at the ICTR.

Igihe.com: In your own words, please describe the events leading up to your arrest in 2010 as well as the 20-days you spent in prison/hospital until your release on June 18th?

Erlinder: I had not been in Rwanda since 2005, when I spent about 1 week on UN mission. Before I entered Rwanda I notified the Rwandan embassy in Washington DC that I wished to enter the country, so that they could turn me away at the border if they wished, as they had done so to a Human Rights Worker earlier that week and the US. State Dept members of Congress. I informed all that Ms. Ingabire had asked me to consult with her. After I arrived in Rwanda on May 23, I presented my credentials to Justice Ministry and to Mr. Ngoga’s office and bumped into Mr. Ngoga himself.I went to US embassy and UN ICTR office to inform them that I was in Rwanda to consult with Ms. Ingabire. I spent 4 days in my hotel and consulting with Ms. Ingabire. I made no public statements and wrote no published documents in Rwanda, never. I was arrested while having breakfast before leaving for the airport on May 28. I prefer not to comment on my detention or the Rwandan government’s conclusion that I attempted to commit suicide.

Igihe.com: What exactly is your current stance upon the 1994 Rwandan Genocide and what is it based upon?

Erlinder: I have no independent conclusion and rely only on the evidence presented by the Rwandan government, ICTR prosecutors, and the original documents in UN and USG files reporting what was occurring according to US and UN personnel 1990 to 1995, as well as the ICTR judgments in Military 1 and 2, which are the only 2 ICTR judgments which have considered this evidence:

The UN/USG documents and Military1-2 Judgements show that;
1. Military 1-2 Judgments both found...NO long term conspiracy by FAR upper level officers to commit genocide or other crimes against tutsi, or other civilians before, or after, April 6, 1994, I accept this as the Judgment of two trial chambers of the ICTR...the prosecution has not appealed;

4. According to the evidence in the ICTR prosecutor’s files, both the RPF and FAR committed massive crimes for which both sides should be prosecuted at the ICTR according to ICTR Prosecutor Carla Del Ponte’s memoirs, published in English Feb. 2009, not me;

If one examines the basis for Rwanda’s charges against me....they are based on articles I wrote in the U.S. that cite evidence or other sources, such as the Economist or the Military-1 Judgement, I cannot say that either is objectively correct....but I can say that the Judgement was issued after given the RPF government almost 10 years to prove that there WAS a conspiracy....for which there IS no evidence. This does not mean that there WAS no conspiracy...just that there is NO EVIDENCE to support the charge.

Igihe.com: Thank you, hope to hear from you soon!

Erlinder: Good luck...I hope you can report with or without distorting the meaning...I don’t know how this will be possible and I hope you stay safe, which is unlikely if you are in Rwanda and not working for the RPF directly or indirectly, as we both know.