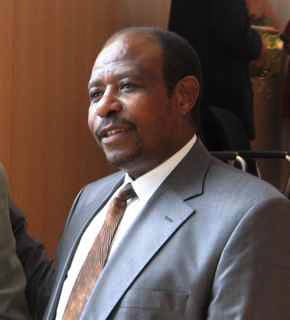 Dear Dutch Official,
While you might not know me, you may know my story from the movie Hotel Rwanda. It  showed how I helped many of my fellow Rwandans survive the Genocide. Today, I am still working for sustainable peace in Rwanda and trying to protect human rights and achieve fairness and justice.

Despite the efforts of the Dutch government and others to help build a solid justice system in Rwanda, people are still not getting fair trials. This letter asks you to use your influence to prevent the extradition of Rwandan refugee Jean Claude Iyamuremye.  Iyamuremye won't face a fair trial in Rwanda's heavily politicized system. The government will stop at nothing, including false accusations and imprisonment, to silence dissidents. If the Dutch think that the accusations against Iyamuremye are warranted, the only way to achieve justice is to try the accused within the Dutch justice system.

Immediately after the Rwandan genocide of 1994, millions of Rwandans took refuge throughout Europe and North America. Since 1994, many more have fled from Rwanda to escape Paul Kagame’s oppressive rule. Even from abroad, President Kagame targets Rwandans who have openly spoken out against him and his regime. Even worse, Rwandan diplomats all over Europe act as spies for Kagame and monitor the actions and the words of Rwandan refugees.

Many Dutch residents of Rwandan descent have been accused of decades old crimes by the Rwandan government. Most have been living without incident in the Netherlands for decades, but found themselves accused after they joined Rwandan government opposition groups. Those who speak out about the bad behavior of the Kagame regime suddenly find themselves targets of the regime.

One refugee currently threatened by the Kagame regime is Dutch resident Jean Claude Iyamuremye. Iyamuremye’s troubles began after he spoke out on ITAHUKA radio in Belgium on April 2013 about a massacre perpetrated by Kagame’s RPF troops in Onatra, DRC on May 13, 1997. He was possibly the only surviving witness. According to a UN report, the killings of Rwandan refugees in the DRC could be considered acts of genocide. The Rwandan government led massacres throughout the DRC between 1993 and 2003, killing hundreds of thousands of Rwandan refugees.

Suddenly, after the radio interview aired, Iyamuremye was accused of committing acts of genocide in Rwanda in 1994. During his trial, Iyamuremye was never told who brought forth the accusations. Nine witnesses were not allowed to testify, without explanation. He has been held in Dutch prison for 7 months. The Rwandan government is calling for his extradition.

The timing and motivation of the Rwandan government’s actions are suspect. Iyamuremye moved to Holland by invitation from the Dutch government, not as an asylum seeker. Iyamuremye's arrest seems to be part of a larger menacing trend of the Kagame regime to reign in dissidents.

For example, in 2010, Victoire Ingabire, a Rwandan Dutch resident since 1993, returned to Rwanda to run for office against President Paul Kagame. Following the election in 2012, she was arrested and found guilty of terrorism, conspiracy to undermine the government and genocide denial. Ingabire was originally sentenced to eight years in prison, however in December of 2013, her sentence was increased  to fifteen years. Andre Kagwa Rwisereka, a Green Party politician was also found killed, decapitated and quartered before the election.

This is not uncommon behavior for Kagame’s regime. The Rwandan government has a history of not only convicting but even assassinating dissidents, no matter where they are in the world.

History shows that once a Rwandan speaks out against the Kagame regime, that person’s life is in great danger. In July 2010, Jean-Leonard Rugambage, a newspaper editor was murdered in Rwanda because he spoke out against Kagame and the RPF. Another example is Charles Ingabire, the editor of a government opposition website, who was shot dead in Kampala, Uganda.

Kagame has gone to great lengths to assassinate former government allies. In August 2013, Joel Mutabazi, a former presidential bodyguard, was abducted by armed men in Kampala, Uganda. One month later, he was abducted again and three weeks after that, he appeared in Kigali court.  In December 2005, the mutilated body of former minister Juvenal Uwiringiyimana was found in Brussels. Assiel Kabera, a former presidential adviser and provincial governor was shot dead in Kigali. A witness said the killers wore military uniforms, linking the murder to the government. Assiel was killed after he openly challenged Kagame’s suggestion that power should be divided among Tutsis. Kabera’s suggestion that governmental power should be shared among Tutsis and Hutus in Rwanda was what got him killed. Finally, former intelligence chief, Theoneste Lizinde was assassinated in Nairobi, Kenya in October 1996.

Kagame regime agents are everywhere. In 2011, Rwandan High Commissioner in London, Ernest Rwamucyo, was warned by British authorities to stop harassment of Rwandan anti-Kagame critics. There have  been reports of Rwandan diplomats in Sweden acting as spies for Kagame against Rwandan refugees. The Swedish government expelled a Rwandan diplomat after finding evidence that he had spied on refugees. More information can be found at  http://www.umuvugizi.com/?p=7629&lang=en .

All of this underscores the fact that the Kagame regime responds violently to criticism. Today, a Dutch resident, is the victim of this. Iyamuremye was not accused of genocidal actions until after he spoke out against the regime and about his experiences in the DRC. Simply speaking out perpetuates the government’s violence. Multiple governments in Europe are aware and cautious of Kagame’s tactics and are making an effort to protect the Rwandans within their borders. Sadly, no government is immune to Kagame’s attempts to manipulate systems in order to punish opponents. I ask that the Dutch government follow the examples of various other European governments that have taken a strong stand against Kagame and his campaign against his opponents.

If any Rwandan in Europe is extradited back to Rwanda, he faces indefinite imprisonment or even execution. He or she will not receive a fair trial. While the Dutch government set up a well organized and efficient Judicial system in Rwanda, those who are running the system are manipulating it and are creating a justice of their own. Justice is only given to those who are allied with the regime. Paul Kagame seeks to punish dissidents and “genocide deniers”— anyone who claims that a Hutu was killed during the genocide.

Whether or not Iyamuremye is guilty him, he will receive a more fair and just trial in the Netherlands than he ever could in Rwanda. I urge you to take this into consideration when you act toward him or any Rwandan refugee.