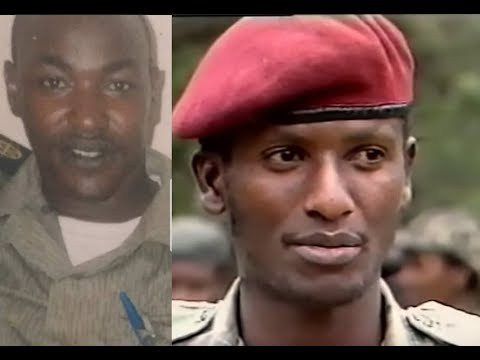 Major Michel Mupende was battle hardened Lieutenant when RPF invaded Rwanda on October 1st 1990.
He was based in the 3rd Division based in Mbale at the time. Before that he was in Military Intelligence working closely with Major Paul Kagame, who was the head of Records and Research in the Directorate of Military Intelligence.
Major Mupende, worked very closely with Paul Kagame in Uganda. He also happened to have been given a sector that was next to where Gen Rwigema was stationed in the morning of October 2nd 1990.
Except for one individual, all officers who moved Rwigema's body from where he was killed to the Land rover 110 had been with him in Mbale.
Besides he was a senior commander who couldn't be prevented from moving a few metres uphill to witness what had happened to Rwigema. He didn't ask any questions when he arrived where the body was. He only made sure to observe the kind of injury that had killed his Commanding Officer.

Paul Kagame arrived in Kagitumba, October around 15th to 18th, with Aloisia Inyumba, in military uniform, with a small civilian bag (JIMTEX) - those who are old enough remember those bags. He carried no gun.

He headed to what was then the command post, where he met with Majors Bayingana and Bunyenyezi. He left in the evening and went back to Uganda and never appeared again until RPA was completely routed from Rwanda.

Majors Bayingana and Bunyenyezi died on the same day - October 23rd 1990 after being accused of killing Gen Rwigema.
The truth, according to Major Michel Mupende,  is Paul Kagame had planned well the take over of power many months before October 1990.

He had Rwigema killed by a group he had handpicked and trained. They called themselves "Cowboys". Then came to make a case against Major Bayingana and Major Bunyenyezi.
The killing of Rwandans began and has not ceased.

THE NARRATIVE
Major Michel Mupende says it all
I would like to challenge anyone who has an eye witness account of the death of Major Gen Fred Gisa Rwigema.
An infitrative force working on behalf of Major Paul Kagame, was able to mix with Rwigema's powerful guard and shoot him from behind.
This was possible because his army; the one  guarding him and headed by Captain Kayitare re-enforced a unit that was exchanging with two reconnaissance APCs from FAR - Inzirabwoba.
Major Michel Mupende was commanding a unit just next to the one Rwigema joined that was on raised ground, about 800 metres to the right and separated by the Kagitumba Ryabega road.

Major Michel Mupende, increased his vigilance when he saw Rwigema and his guards walking from Kagitumba to observe the progress of the fist encounter with FAR.
Mupende followed Rwigema movement as he turned to the right and climbed to the position of the main support gun that had engaged and disabled two recoinassance APCs. The two APCs had been disabled by the time Rwigema arrived at the scene. Major Michel Mupende says, although he could see all the action his unit was not in position to engage the enemy because of the lower position they were advancing in compared to the road, much more Rwigema's position.

Major General Rwigema stayed about an hour and one half at that raised position with the two units he had clearing the entire area ahead of them. There was no return fire except the one from the APCs that has been silenced about 2 hours before.

Both personnel in the two APCs, disembarked and retreated having failed to manoeuvre the APCs and drive back.
One was still maintained the Kagitumba heading, while the other was was abandoned in  the process of its turning back.

In the middle of clearing the area, one of the people in the 30 man team that Paul Kagame had managed to infilitrate near Rwigema shot Rwigema from behind.

Major Michel Mupende Mupende followed events as he saw Rwigema's body as it was carried down to a white Land rover 110.
A number of officers carried the body.

2nd Lt Katongole was the first to slope down alone to find a transportation for Gen Rwigema's body. "Afande afudde" Katongole told Mupende.

Dr Karemera  ( lived with Mupende in Mbale, was also head of mobilization of RPA in Mbale before the invasion)

Major Michel Mupende asked a soldier who was also his uncle but of a lower rank to accompany him to investigate the emergency.

The car that came to pick Fred's body  had the following officers:

2. Kilindi ( had worked as a senior officer to Mupende in DMI Uganda)

3. Steven Balinda. Was head of Personel and admnistration in the 3rd Division based in Mbale
These took the body back to the Kagitumba. In the evening Major Michel Mupende pushed hard through Dr Mutimbo to look at the body for the second time. By this time, Rwigema's death had become a top secret.
Major Michel Mupende was able to observe the entry wound which was at the back of the neck and the exit wound which was at the front of the neck.
He died instantly owing to vital structures like the spinal cord that must have been shattered.
An entry wound is usually small and because of the elasticity of the skin and depending on the weapon used, including that of the AK 47,  one may need to touch the body to see a bullet entry wound.

The exit wound on the other hand is massive because the bullet comes out of the body pulling with it damaged tissue which causes some kind of explosion, where it comes out.