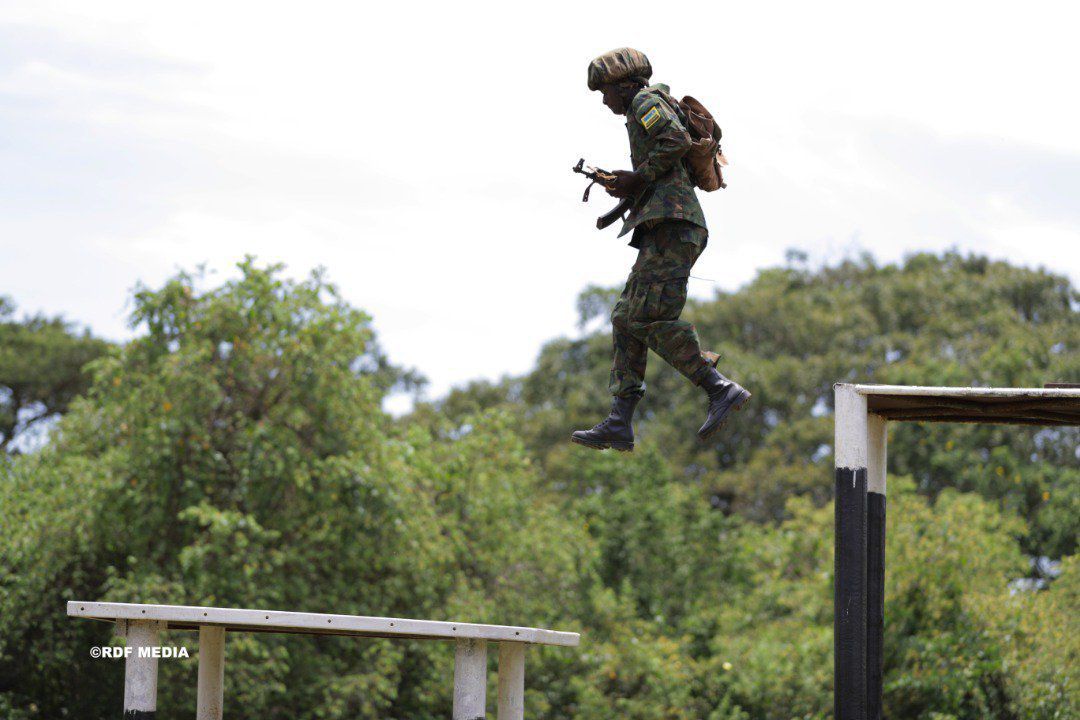 Multiple sources reported that a top Rwandan Brigadier was shot dead while a Lieutenant Colonel was captured alive and taken prisoner.

While the Brigadier is still unnamed, the captured senior officer was identified as Lt Col Pierre Karasira of Rwanda Special Forces.

At the start of the week, a Rwandan military helicopter landed at Kanombe military hospital, teeming with war casualties.

“About 200 soldiers of RPF were killed. Even the plane [fighter jet] that was coming to rescue them on the Burundi border was shot down,” said a member of the Banyamulenge community.

Other sources told edge.ug that many Rwandan soldiers were killed but were unable to verify the actual number.

At the close of May, Rwandan President Paul Kagame entered the capital Kinshasa as a surprise guest at ceremonies to honour deceased opposition leader Etienne Tshisekedi hosted by his son Felix, the country’s president.

Once Congo’s sworn enemy, Kagame joined Tshisekedi and Angolan President Joao Lourenco for a central African mini-summit ahead of the long-awaited tribute.

The three vowed to “strengthen the Congo-Angola-Rwanda axis” to “wipe out Congolese and foreign armed groups,” a joint communique said, apparently referring to brutal militias which plague the DRC-Rwandan border.

Kagame had last visited Kinshasa in 2010.

Relations between Rwanda and the DRC have been chilly since the 1990s, when Rwanda invaded the country to back rebels trying to overthrow Kabila’s father, former president Laurent Kabila.

Despite an improvement in tone since Tshisekedi took over January 24, ties remain troubled by cross-border attacks on Rwandan forces by the Democratic Liberation Forces of Rwanda (FDLR), a rebel group based in the DRC.

The DRC, meanwhile, has accused Rwanda of pillaging coltan, a lucrative mineral used in electronic products, in the border region of North Kivu.

On June 21, Mai Mai Yakutumba militiamen clashed with FARDC [Congo army] Naval Forces in Fizi, South Kivu where one was killed and three others injured.

Reports then emerged that Kagame was supervising the war having deployed his Special Forces into South Kivu to battle armed groups.

Another report also emerged saying Burundi Special Forces sent by President Pierre Nkurunziza are in Congo battling on Banyamulenge’s side against RDF which is allegedly backing Mai Mai rebels and the Red Tabara rebels.

Available reports say this attack alone left over 40 Banyamulenge dead while their homes and farms were burned down and sent hiding into the forests.

Alexis Byicaza, the leader of “Innovative Forces off Union and Congolese Democracy” said Banyamulenge resolved to resist Rwandan aggression towards mid-June this year.

The centre of action was Minembwe, an alleged rebel base of Rwanda National Congress [RNC] rebels led by former Rwandan General Kayumba Nyamwasa.

At the close of last week, the same fighting force invaded Irumba and Kaseke villages in a bid to capture Minembwe.

It is alleged that Kigali wants to create a buffer zone in DR Congo for Red Tabara in the fight against President Pierre Nkirunziza’s government.

Sinduhije who leads Red Tabara is believed to be traveling on Rwanda documents after being blocked by Bujumbura. He was blacklisted by the USA on human rights related charges committed in the region.

Members of the Banyamulenge say for nearly two months, there has been a scorched earth policy against Banyamulenge by Rwanda’s Special Forces and Mai Mai elements who were trained in Rwanda’s Gako Training Wing.

They are reportedly being uprooted from their homelands, houses burned, cows stolen and made to flee from their villages in Mibunda, Tulambo and Malunde.

As a result of the intense fighting, RDF soldiers registered unknown casualties who are currently being treated at Kanombe military hospital.

They fell at the hands of Banyamulenge Gumino group which is determined to preserve its territory.

Reports linked rebel leader Sinduhije to Albert Rudatsimburwa, a member of Rwanda’s first family, saying they were “old friends” and were “still in touch”.

When contacted, Rudatsimburwa dismissed the allegation as “laughable”.

He said about 1st family “those stories always evolve with understanding of a banana republic which is really missing the point with Rwanda…Alexis is known by many but close only to himself”.

Writing in the state-run New Times Rwanda on June 22, 2019, Rudatsimburwa said there is substantial evidence showing that the Uganda-RNC agenda to destabilise Rwanda is failing miserably.

Barely a year ago, few could have predicted an embarrassing outcome from which that agenda’s chief architect Kayumba – would be begging for dialogue, he went on.

“Geopolitical analysts must ask the question, what exactly prompted this change and what does the future portend for the unholy alliance between RNC and Museveni? Has Museveni suddenly discovered that partnering with a terrorist organisation is bad politics? The answer is clearly, no.”

Rudatsimburwa said Museveni has tried everything he could, using proxies to destabilise Rwanda, but the results keep disappointing him; it appears he now has to ask himself whether his support to Rwandan armed dissident groups doesn’t represent sunk costs from which he ought to cut himself loose.

“Museveni’s support has been enormous. He has provided the RNC a recruitment base, with its recruiters given free rein to mobilize support across Uganda. They have the freedom to intimidate Rwandans into joining the terrorist organisation; they are free to arrest and torture Rwandans who refuse to either join or make financial contributions to it.”

He wrote that Uganda’s Chieftaincy of Military Intelligence (CMI) and the Internal Security Organisation (ISO) are doing all they can to implement his instructions.

“They have facilitated visits of senior RNC officials who travel to Uganda frequently to monitor “progress” achieved by their operatives on the ground.”

He further wrote that in September 2018, Benjamin Rutabana, the RNC’s head of capacity development, was able to crisscross recruitment bases in Wakiso, Mubende, Kiboga, and Nyakivara, with ISO providing him the kind of protection that even Uganda dignitaries have failed to secure for themselves.

“Tribert Rujugiro, the RNC main financier, has partnered with Museveni’s younger brother Salim Saleh to set up business in Uganda, with the proceeds going towards financing RNC activities.”

Rudatsimburwa further wrote: “Rujugiro lands at Entebbe Airport, he finds President Museveni’s Special Force Command (SFC), the presidential guard, at the airport tarmac to pick him up and deliver him to his meetings with Museveni, as Uganda’s president has himself admitted to these meetings in his letter to President Kagame last March.”

“Top officials of the FDLR –LaForge Bazeye and Lt Col Theophile Abega– who were captured by DRC security at the Bunagana border on their way back from a coordination meeting in Kampala last year (December 13-14) confirmed that their visit had been at the invitation of Uganda’s Minister of State for Regional Affairs, Philomen Mateke, and that Frank Ntwari represented the RNC at the meeting.”

He said Eugene Gasana and Charlotte Mukankusi were beneficiaries of this treatment during their meeting with Museveni in March 2019 (which also President Museveni admitted to in the same letter to President Kagame) when they travelled on Ugandan passports, to request for more support for the terror outfit, to which, according to reliable sources, Museveni responded “We are together.”

“Indeed they are – for now. However, more misfortune would continue to pile up. Less than two months later, in May 2019, the commander and spokesman of the FLN, the armed wing of Paul Rusesabagina’s MRCD, was arrested and confessed to having met with Uganda’s top security officials, and that at the moment of his capture a meeting between him and Brig Abel Kandiho, chief of Uganda’s CMI – who had agreed to provide support to his rebellion – was pending.”

The MRCD is part of the P5, an RNC-led rebel coalition whose fighters are based in the DRC, and whose overall commander is Kayumba Nyamwasa, according to the 31 December 2018 United Nations Group of Experts Report on the Congo, which also confirmed the above mentioned existence of an extensive rebel recruitment network, including “logistical” support from Burundi.

Rudatsimburwa wrote: “We are together” has not been enough, according to reliable sources, militarily, the number of casualties on the side of the multitude of RNC, Kayumba’s terrorists on Congolese territory has been mounting, “many have been killed and dozens captured,” adding, “Doubters will soon be provided with ample evidence!”A Rwanda Special Forces soldier during training

Reports from the neighbouring Congo indicate that senior Rwanda Defence Force [RDF] officers have been killed or captured in the ongoing war with Banyamulenge [a Tutsi community] in South Kivu ...