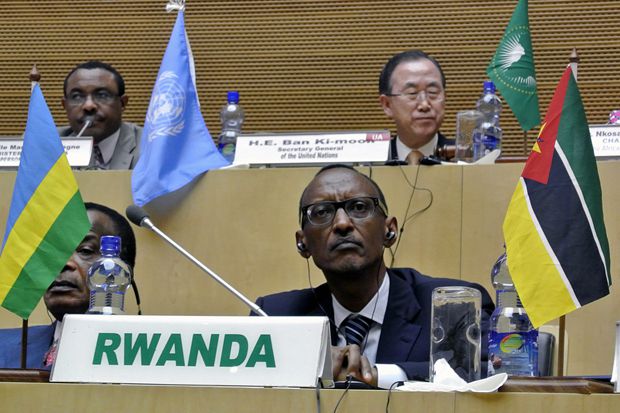 Never lighthearted, my African political exile friend sounded particularly lugubrious on the line from Washington. His voice was low and pensive. For the past few months, he said, he’d been hearing of plans hatched by the regime back home for his assassination. ‘They are very gruesome, very gruesome indeed.’

It was not the first time. In the past he’d always passed the details on to the FBI, which had also called him up several times when they thought he was in danger. This time he hadn’t bothered. ‘I always ask them: ‘What are you doing to protect me?’ and they say, ‘Well, if you see anything suspicious, call 911.’ I’ve come to the conclusion that the people here, or the people in your place, honestly don’t care about our lives.’

I’ve had similar conversations with rather too many of his haunted fellow nationals, dissidents convinced that fleeing the country of their birth has done little to guarantee protection from an African government they dared to challenge. What’s chilling is that the nation concerned is not some oil or diamond giant whose wealth allows it to arrogantly defy international opprobrium, some drug-trafficking republic run by a crazed general. This is no failed state, torn apart by warring militias.

No, it’s orderly little Rwanda, the ultimate ‘donor darling’, and a government that relies on western aid for nearly 40 per cent of its operating budget, much of it provided by the United States and United Kingdom. Its president, Paul Kagame, hobnobs with the likes of Bill Gates, Bill Clinton and the Blairs — Tony advises him on governance and Cherie recently defended his spy chief on war crimes charges in a British court. Kagame so impressed the organisers in Davos that Kigali is due to host the African edition of the World Economic Forum in May.

You might think the intimacy of that relationship would grant western officials some leverage on behalf of the likes of Theo-gene Rudasingwa, founding member of the Rwanda National Congress (RNC) party, who shared his concerns over the phone. Or that Kagame’s regime might think twice before embarrassing its western sponsors. You’d be wrong.

As the man who has run the country since a genocide perpetrated by the late Juvénal Habyarimana’s forces shows signs of becoming permanently entrenched, suppressing all criticism and contemptuous of international opinion, the response by British and US policymakers goes little further than putting their fingers in their ears and singing ‘la la la.

Any student of the Great Lakes will already be familiar with the claims and counterclaims that have swirled around the region since the 1994 genocide. Well-informed analysts reject the neat theory of the ‘double genocide’, whereby killings of nearly a million Tutsis and moderate Hutus by Habyarimana’s soldiers and militiamen were somehow morally counterbalanced by the massacres of Hutus committed by Kagame’s advancing Rwandan Patriotic Front (RPF) rebel movement. But anyone who reads Jason Stearns’s Dancing in the Glory of Monsters can be in little doubt there is copious blood on RPF hands, shed in both Rwanda and the Democratic Republic of Congo. This is a complex story, without easily identifiable goodies and baddies.

So Kagame has always been accused of ruthlessness, but the violence was excused in Washington and London on the grounds that Rwanda sat in a tough neighbourhood. A regime that had ended a genocide could not be expected to respect the Marquess of Queensbury rules, the thinking went. But what the international community, mired in guilt for failing to stop the 1994 massacres, fails to register is that the human rights charges now being lodged against Kigali can’t be viewed through the traditional lens of scarred Tutsi survivors hitting out at unrepentant Hutu genocidaires. Like most of Kagame’s most vocal critics today, Theogene Rudasingwa is a Tutsi. He was once Kagame’s chief of staff and Rwanda’s ambassador to the US.

Kayumba Nyamwasa, who was shot in the stomach in a South African shopping mall in 2010 and lives under armed guard in that country, was the Rwandan army’s chief of staff before setting up the RNC. He also is a Tutsi. So was co-founder Patrick Karegeya, former Rwandan intelligence chief, strangled last year in a South African hotel. These men were not saints, but it’s difficult to portray them as genocidaires either, although the regime in Kigali does its best. No, this is a case of the revolution devouring itself, as possible political rivals and successors from within the RPF’s cosy Tutsi elite are systematically eliminated.

Shockingly, national borders count for nothing in Kagame’s campaign of removal and intimidation, a recklessness that can only be premised on the all-too-accurate assumption that western donors whose territorial sovereignty is violated in this way may fulminate in public but never take substantive action.

Not only have US authorities felt impelled to inform Rwandan dissidents on American soil that they are in danger — a congressman recently revealed that they issued a formal warning to Major Robert Higiro, a former Rwandan army officer who exposed Kigali’s assassination plans and was living in Belgium, telling him his life would be in danger if he stayed there.

The British have taken similar action in the past, too. In May 2011, the Metropolitan Police formally warned two Rwandan dissidents living in London that they faced an ‘imminent threat’ of assassination and turned back their suspected attacker, who had taken the coach from Belgium to Folkestone.

Logged by Human Rights Watch, the series of killings, disappearances, kidnappings and jailings appears to have escalated as Kagame’s personal ambition has hardened. Last month, in a referendum whose outcome bore more than a whiff of Ceausescu’s Romania, 98 per cent of Rwandans voted for a constitutional change allowing Kagame to run for a third, fourth and fifth term. In his new year’s address, to no one’s surprise, he confirmed that he would stand. That means he could still be in power in 2034.

The US has made clear its disapproval, with Samantha Power, ambassador to the United Nations, surprisingly forthright on the topic. However, it’s hard to imagine Washington, which puts great weight on Rwanda’s readiness to deploy troops as peacekeepers in African hot spots, putting its aid money where its mouth is.

And what about Britain, due to provide Kigali with at least £75 million in aid in 2015/16? Under Clare Short and Andrew Mitchell, the Department for International Development was an ideologically driven ministry, ready to robustly defend funding to the likes of Rwanda. Today’s ring-fenced budget, legally enshrined at a time when so much public spending faces the axe, should in theory boost institutional confidence. Instead, the department under Justine Greening, who never asked for the job, appears to lack both backbone and moral conviction.

These days it’s virtually impossible for journalists to meet anyone in authority at Dfid, including Greening. Colleagues’ experiences tally with mine. When I asked the press office whether Dfid felt any qualms about funding an African government that was conducting targeted assassinations on its allies’ territory, it sidestepped the question, stressing that no aid goes directly into Rwanda’s Treasury, as though that dealt with the issue. ‘The UK government will continue to make decisions concerning aid to Rwanda based on the government’s commitment to poverty reduction, anti-corruption, transparency, human rights and domestic accountability,’ ran the bland Dfid statement I eventually received after a fortnight of chasing. ‘As part of our bilateral partnership, we regularly raise concerns about civil and political rights in Rwanda and continue to press for reforms in these areas.’

The questions Dfid ducks so determinedly have never been more pertinent. In recent years, the quiet belief has taken hold in aid circles that benign dictators are better at delivering clean water, paved roads and primary education to ‘the poorest of the poor’ — always that justifying mantra — than messy, unstable democracies. Kagame, who used to share the crown with the late Meles Zenawi of Ethiopia, now epitomises this development model, a form of idealism that allows for some alarmingly cynical policies.

At the very least, the taxpaying British public should be allowed to debate whether its taxes should be going to prop up a regime that even its closest allies acknowledge routinely uses murder to crush political challenge. A thick grey wall of bureaucratic obfuscation currently ensures it never gets that chance.

Michela Wrong has reported from across Africa. Her books include In the Footsteps of Mr Kurtz, It’s Our Turn to Eat and, most recently, Borderlines, a thriller.