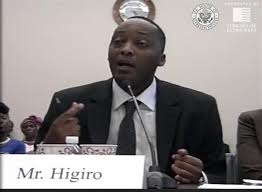 I’d like to thank you for inviting me here today.

My name is Robert Higiro. I was born and grew up in Uganda, where my parents lived as refugees after being forced to flee from Rwanda in 1959. In 1990, I joined the Rwandan Patriotic Army to fight for justice back home. I was part of the forces that seized control of Kigali in July 1994. Those efforts led to the toppling of the former Hutu government and brought an end to the genocide in Rwanda.

At that time, like many of my compatriots, I sincerely hoped that Rwanda could be rebuilt from the ashes, and that the country would ultimately become a place where Hutus and Tutsis could live together in peace and harmony. I was committed to the ideals of the new country.

I spent two decades in the Rwandan Patriotic Army, working my way up the ranks to the position of Major. I served two tours as a peacekeeper with the African Union and United Nations missions in Darfur, Sudan.

I returned home to Rwanda in 2010 and learned I had been de-commissioned and was out of a job. It was clear I had fallen out of favor with the government. Yet I had a family to feed and needed a job. I went to Uganda to pursue business opportunities there.

Before long, I was summoned back to Rwanda for questioning by the military leadership through the Director of Military Intelligence, Col. Dan Munyuza. I was interrogated about my links to the former Army Chief of Staff, Gen. Kayumba Nyamwasa, and the former head of National Intelligence and Security, Col. Patrick Karegeya. Both Nyamwasa and Karegeya had fallen out of favor with President Kagame and had fled Rwanda to South Africa.

This happened to me and to many other officers. Brigadier General Tom Byabagamba, deputy sector commander in South Sudan, and General Frank Rusagara, military attaché in the United Kingdom, were both sent to prison in Rwanda upon completion of their service. And there were others. It is clear that the Rwandan military leadership was extremely fearful that decommissioned soldiers would join up with individuals they viewed as dissidents.

After my interrogation, I became suspicious that they were trying to recruit me to become an assassin. My fears were confirmed by my former officer trainees who were charged with following me. They approached me and warned that trouble would ensue if I didn’t leave the country. I fled to Senegal where I started to work for a French security company.

In 2011, Col. Dan Munyuza, the Director of Military Intelligence who interrogated me about my links to Nyamwasa and Karegeya, tracked me down. One of his intermediaries approached me in Senegal and said Munyuza had a job for me.

At that moment I was worried. I knew the military leadership wanted me to do a dirty job and that there would be no way out of it. That’s the way it works in Rwanda. They look for people they think are vulnerable or weak. If you say no, they track you down and kill you; if you agree, they will eventually kill you too. You have no options.

Eventually Munyuza called me and said: “We have decided to give you this job: you have to go to South Africa and take out General Kayumba Nyamwasa and Colonel Patrick Karegeya.”

He said if I succeeded I would “be a hero.”

I was desperate. I needed to buy time. I called Patrick Karegeya, someone I knew, to warn him. I told him the story. Patrick was unfazed. We agreed I would come to South Africa – to do as Munyuza said, at first – and that we’d figure out a plan.

Patrick and Kayumba told me how to handle the situation. They advised that I go through the motions, play along and tape my conversations with Munyuza to gather evidence. So that’s what I did. I told Munyuza I knew people who could facilitate access to Patrick and Kayumba’s bodyguards. Munyuza said he’d offer $1 million to carry out the assassination. We discussed the weapon, the modalities of payment and other financial incentives if the assassinations were successful.

In the end, Munyuza didn’t want to hand over the money before Kayumba and Patrick were dead. I feared for my life so I fled South Africa for Uganda and then crossed over into Kenya. I am now living as a refugee in Belgium. I am today -- like other dissidents -- a wanted man in Rwanda and on a hit list abroad.

On New Year’s Day 2014, Kagame achieved his wish. Patrick Karegeya was found strangled in a hotel room in Johannesburg.

Kayumba Nyamwasa, who had already been shot and survived previous assassination attempts, is still standing.

For me, Patrick’s death was the straw that broke the camel’s back.

I decided to share my story with a leading Canadian newspaper called the Globe and Mail. I gave the newspaper access to the tapes I had recorded, and they had the tapes independently translated. Journalists confirmed with several former Rwandan officers that the voice on the tape was indeed Dan Munyuza’s. I was able to offer material evidence of a murder-for-hire operation planned by the Rwandan government. The BBC picked up the story as well.

Patrick was not the first Rwandan dissident targeted and murdered, however.

Here I give examples of Rwandans murdered at home or across borders:

In October 1996, Colonel Théoneste Lizinde, a prominent Hutu who had joined Kagame’s Rwandan Patriotic Front as a senior intelligence officer and Member of Parliament, was shot dead on the outskirts of Nairobi, along with Hutu businessman Augustin Bugirimfura.

In May 1998, Rwandan assassins gunned down former RPF interior minister Seth Sendashonga, also a Hutu, in the streets of Nairobi.

In 1995 and 1998 respectively, journalists Manasse Mugabo and Emmanuel Munyemanzi disappeared in Rwanda and were never found again.

In March 2000, a prominent Tutsi genocide survivor and founding member of Ibuka, the national organization for genocide survivors, Assiel Kabera, was shot three times and killed in front of his home in Kigali.

Ahead of elections in 2003, opposition Member of Parliament Léonard Hitimana disappeared in Kigali, never to be seen again.

In 2010, in the run-up to another election, Andre Kagwa Rwisereka, the deputy head of the Democratic Green Party, was found beheaded.

In 2010, journalist Jean-Leonard Rugambage was shot dead in Kigali. In 2011, outspoken journalist Charles Ingabire died after being shot twice in the chest in Kampala.

In late 2011, a member of the opposition party FDU, Jerome Ndagijimana, was found in a pool of blood in Kampala. His throat had been slit.

The list goes on and on, unfortunately. In the last few months alone, a prominent Tutsi businessman Assinapol Rwigara and Kagame’s former doctor Emmanuel Gasakure were murdered in Kigali.

The reality is tragic.

I’d like to end with a message to my fellow Rwandans. Hutus and Tutsis have much to atone for with regard to one another.

Like me, many Tutsis support the establishment of a truly independent court that would prosecute crimes committed by President Paul Kagame and his allies.

When Nelson Mandela was inaugurated in 1994 he said:

Out of the experience of an extraordinary human disaster that lasted too long, must be born a society of which all humanity will be proud.

I sincerely thank the subcommittee for its time and interest and respectfully ask for its help – and the help of the entire U.S. Congress – to urge Rwandans to put aside their divisions - regional, political and ethnic – and work peacefully together to end this repressive regime. 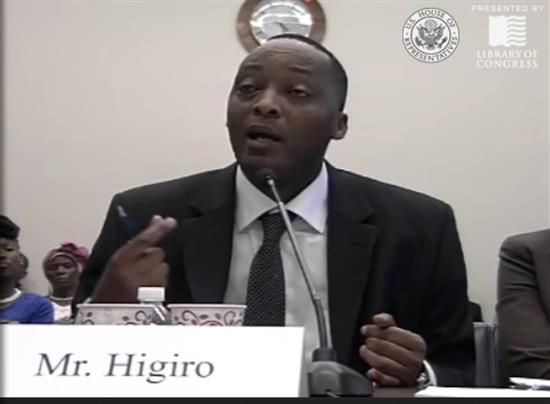